In 2003 the EUREF Technical Working Group (TWG) has launched the EUVN Densification Action to establish a continental homogeneous GPS / levelling database consistent with ETRS89 and the EVRS.

EUVN-DA and the related database is designed to

The National Mapping Agencies were generously supported the project, they provided existing, updated or newly measured data sets. As of Winter 2009, 25 countries participate, and the database contained more than 1400 GPS / levelling points.

EUVN-DA has been closed in 2009, however the maintenance of the EUVN-DA database is planned in the frame of the EVRS, and occasional upgrades may be published when significant new input data become available.

The final product of the EUVN project was an open database, where all benchmarks were associated with cm-accuracy 3D coordinates in ETRS89 (ETRF96 epoch 1997.4) and geopotential numbers related to EVRS2000 zero level, which were used to derive normal heights. Detailed description of the project and the results can be found in (Ihde et al, 2000). To get an independent measure of quality the authors compared the available ellipsoidal and normal heights with the EGG97 continental quasigeoid solution. Generally, the EGG97 and EUVN height anomalies agreed within 2 dm (see Figure1), where some points are suspected as outlier. There are regions (Alps, South-East-Europe, Baltic, Central Scandinavia, Atlantic coastline), where systematic, large scale trends and / or biases are clearly observable. As EUVN is a sparse network the modeling and separation of the large scale biases was hardly possible. The general conclusion was that a more accurate continental geoid solution and a denser GPS / levelling network is required. 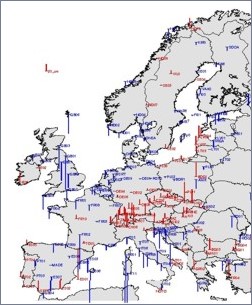 Figure 1: Differences of the EGG97 and EUVN height anomalies (click to enlarge)

The main task of EUVN-DA is the creation and maintenance of an accurate standardized, dense continental GPS / levelling database. EUREF closely cooperates with EGGP in the creation of an accurate continental height reference surface, consistent with ETRS89 and the EVRS. EUVN-DA not considered as a direct continuation of the EUVN project. The EUVN-DA activities are more practice-oriented, the tasks, already successfully completed in EUVN (levelling network connections, height datum establishment, tide gauge investigations) are out of scope.

Due to the expected large number EUVN-DA benchmarks (over 1200 points) a coordinated GPS campaign was not feasible due to financial and logistical constrains. Each participating country was asked to establish the national contribution independently, along pre-defined quality standards. Existing GPS / levelling data, corresponding to the standards was also accepted.

Although the established set of quality measures would allow to achive the 1 cm accuracy both for the GPS and levelling data on the local level, the full homogeneity for the whole network cannot be reached, due to the variable reference epochs of the measurements. The Nordic countries are exceptional, they agreed on a commonly accepted Land Uplift model (NKG2005LU), which is used to transform the measurements performed in different epochs to epoch 2000.0.

The homogeneity of the levelling data - in terms of reference frame - was ensured, as most of the EUVN-DA benchmarks are connected to a nearest UELN marker. Such EUVN-DA points are becoming part of UELN and they will be included into the future UELN adjustments.

noting Resolution No.3 of the EUREF Symposium 1998 in Bad Neuenahr-Ahrweiler,

thanks the National Mapping Agencies for their support in supplying data,

recommends that the GPS / levelling heights of the EUVN solution should be used as fiducial control for the future European geoid determinations,

to complete and extend the EUVN project.

its Technical Working Group and the European Subcommission of the IAG IGGC (International Gravity and Geoid Commission) to take all necessary steps to generate a European geoid model of decimetre accuracy consistent with ETRS89 and EVRS.

asks the TWG to contact the European Geoid Project in order to develop a combined European geoid to link ETRS89 and the EVRS.