The responsible national institutions and mapping agencies were asked to provide high quality GPS derived coordinates and levelling data measured at selected benchmarks. The expected site separation was 100 km as a compromise between the spatial resolution of the global geopotential models and the data preparation costs. Countries, where the GPS / levelling networks have been established prior to the start of EUVN-DA were asked for a denser database - close to the 50 km mean separation.

The EUVN-DA database consists of more than 1400 GPS / levelling points (as of December 2009) contributed from 25 countries.

In theory, the reference epoch of the ellipsoidal and leveled heights is 2000.0, but practically the data refer to the epoch of the observations. The age of the levelling data is variable, ranging from 1 – 70 (!) years, while the GPS campaigns have been done during the last decade. The inhomogeneous reference epoch is the weak point of the current EUVN-DA database, because the validity of the included height information should rely on the assumption of the long term site stability. The Nordic countries are exceptional, where due to the well modeled post-glacial rebound (PGR) the heights were transformed to epoch 2000.0 using the latest PGR model NKG2005LU (Ågren and Svensson, 2007).

The submitted GPS and levelling data have been transformed into the respective common reference frames. The GPS coordinates are refer to the different realizations of ETRS89, while the levelling data are transformed to the actual realization of the European Vertical Reference System EVRF2007. During the project's lifetime the definition of the EVRS definition was changed from EVRF2000 to EVRF2007 (Sacher et al, 2008). The introduction of the EVRF2007 standards in 2008 has changed the datum definition and the handling of the permanent tide. Formerly the permanent tide was inconsistently handled in levelling (mean tide) and GPS analysis (tide free) disregarding the respective IAG recommendation to work in the zero tidal system (IAG, 1984). Due to the change from the mean to zero tidal system in EVRF2007 the GPS-derived ellipsoidal heights were transformed from the tide-free to the zero tidal system.

The distribution of the EUVN-DA including the original EUVN benchmarks is shown in the figure below. Clicking to the links below the map the benchmark distribution to each country will shown. 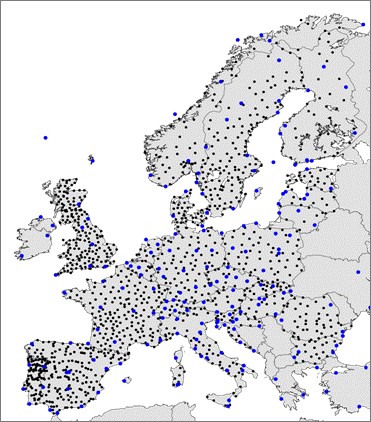 The table below summarizes the data contributed by the countries